The smarter way to learn and play music

Playing a musical instrument is one of the great joys of life. Only problem is, it takes years of practice. That’s why a lot of people don’t learn, even though they love music. But we’ve figured out a new, smarter way to learn and play.

LUMI lets everyone play and jam along to hit songs. You’ll be more musical in minutes — and amazed at how quickly you progress!

LUMI is a fully illuminated keyboard and interactive app. Everything is connected by light and color. Just follow the colors in the app and the lights on the keyboard, and you can’t go wrong.

LUMI Keys and the LUMI app work together so you can:

PLAY great songs, note by note, just by following the lights — in your own time, at your pace. When you're ready, move onto colored notes or sheet music.

JAM along to songs, just like you’re in the band. The chords and notes in the song’s scale light up, so you can improvise in real time.

LEARN music fundamentals not only by playing, but also through fast and fun interactive lessons.

LUMI is for anyone who ever wanted to play an instrument. It's also for people who want to revive forgotten piano skills, and it's even for musicians who want a fun, portable way to play.

LUMI takes music from black and white to technicolor. You can see it the moment you turn on LUMI Keys. The world’s first modular, fully illuminated keyboard is different from any other you’ve seen.

Play anywhere. LUMI Keys glows, even outdoors. ROLI Brightkey™ technology makes it the brightest keyboard ever made. State-of-the-art ray trace analysis and a Fresnel Lens-inspired design creates 10,800 millicandela of light in each key distributed from end to end.

LUMI’s keys don’t just look amazing. They feel amazing too. They have a custom size of DS 5.5® which is optimized for the average human hand, plus 92% of the plunge distance of a grand piano key. This makes LUMI’s keys more comfortable to play than any other compact, portable keyboard.

Compact and lightweight, LUMI Keys can travel anywhere. At just 600g it weighs less than an iPad Pro. It’s smaller than almost all laptops, so it fits easily in bags and backpacks. When you’re taking LUMI on the go, you can protect the keyboard in style with a custom-made Snapcase.

The LUMI app, its song library and LUMI Keys were designed to create a single, unified experience. The colors in the app and the lights on the keyboard integrate and interact perfectly, from the moment you pair them wirelessly via Bluetooth.

LUMI Keys is powered by the LUMI app. It’s where you pick songs and decide how you want to play them. No matter what you choose, you’ll have fun!

PICK A GREAT SONG: Browse a library of great songs that span genres from pop to classical.* Once you’ve found a song you love, you choose what part of the song to play, whether it’s the melody, chords or the bassline. Every month there are more songs to choose from.

CHOOSE YOUR VIEW: Progress from simple to advanced views for reading music. Start with colorful shapes that stream down the screen, telling you exactly when to strike a note on LUMI Keys. Move all the way to reading sheet music.

MOVE AT YOUR OWN PACE: No matter what view you choose, you can get started at a speed that’s comfortable for you. Watch how the song is played before you start. Start slowly, pause, and speed the song up to its normal tempo when you’re ready.

Songland, NBC's newest primetime show, is where aspiring songwriters compete to create the next global hit. LUMI Keys is the instrument of choice for Songland judge Ryan Tedder, the Grammy Award-winning singer and producer behind hits from Beyoncé, Adele, Taylor Swift, and Ed Sheeran. 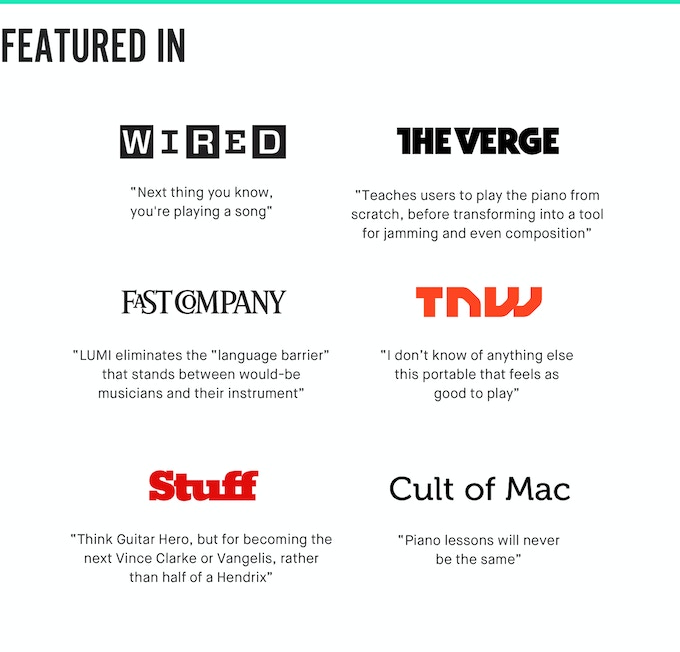 LUMI Keys is for everyone, including musicians. It's a high-performance MIDI controller that's more versatile and compact than any other its size:

TAKE IT ANYWHERE FROM STUDIO TO STAGE

LUMI Keys combines playability and power in an ultra-portable design. It weighs less than an iPad Pro, and it fits in a backpack. Even when you connect multiple LUMI Keys together you can easily unsnap them and carry them anywhere.